Hungary edged out Russia 23-22 in the 13th round of a penalty shootout to claim the bronze. 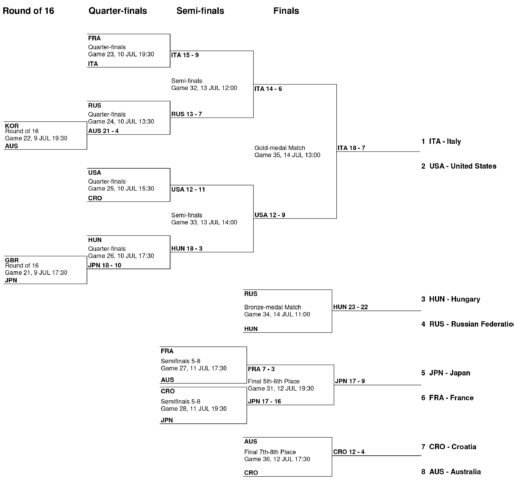 After 32 minutes of play, the score was tied at 10-all. It took until the 13th round of the penalty shootout to decide the game. Each team made its first 12 attempts, before Kristof Varnai hit the 13th for Hungary and Ivan Gusarov had his saved by Istvan Kardos to end the marathon match.

Hungary led 3-1 after the first quarter after hitting three extra-player shots. Russia countered with four goals – two extra-man shots, a counter attack and an action shot – in the second period, tying the score at 5 heading into halftime. Merkulov accounted for three of the goals.

Russia grabbed the lead with a Merkulov extra-man shot and a 5-meter goal by Suchkov in the third quarter. Burian answered for Hungary with an extra man shot and a counter attack to knot the score at 7 with 6:42 to play. Down 8-7 after a Suchkov goal, Hungary vaulted ahead with an extra-man goal by Gyarfas and an action shot by Rolf Bencz. Bychkov tied it up with a penalty with 2:30 to go and gave his team the lead time ticking away. Kristof Szatmari slipped in a final score for Hungary to send the game to a shootout.

Erik Csacsovszky, Gyarfas and Varnai made three penalties apiece for Hungary, while Szatmari and Daniel Santa each scored twice.

For Russia, Merkulov and Ivan Vasilev found the back of the net three times with penalties, while Nikita Krug, Gusarov and Bychkov hit two shots apiece.

Italy opened the game with a 4-1 run and ended it with an 8-3 fourth quarter to deny the Americans the gold medal.

Italy made 18 of its 36 shots, while the Americans managed seven scores in 20 attempts.

The host team put in two action shots, a center shot and an extra-player goal to grab the early 4-1 advantage. Abramson and Thomas Gruwell countered with action shots in the first four minutes of the second stanza to pull the USA within one (4-3), but Italy closed out the half with three scores in the final 2:11 to go up 7-3 at the break.

Italy continued its scoring onslaught with three goals – an extra-player, a penalty and a counter attack – in the first five minutes of the third quarter. An Abramson extra-player score with 14 seconds left ended the 6-0 run.

Later, trailing 12-4, Woodhead and Cavano made good on extra-man tries to pull the USA within six at 12-6 with 4:30 to go. From there it was nearly all Italy as the teams traded goals, before the victors wrapped up the match with a 5-0 push.

Orange’s Q3 sales up 0.8% on strong demand in Africa, Middle-East

Arab Business Schools Seek a Better Return on Their Investment

Three of our best choices from the Battle of the Books...

Black Hat USA 2019 Closes Out Another Record-Breaking Event in Las...